I finished the Mysterions.  What should have taken me only a few minutes to do turned into hours because I was having way too much fun thinking up of ways to animate them.  And by “them” I mean the balls.  Lots and lots of balls.  But I’m getting ahead of myself here…

First, here is how they looked in the original game:

To start off, I created a grid of 8 by 8 by 8 balls, or in other words a 3D grid of 512 balls.  Then I whittled away the corners of the “cube” of balls until it was a “sphere” of balls.  That left me with 208 balls.  That was it for the work needed to be done in 3D Studio Max, and it was time to bring it into Unity.  Here is a screenshot of how it looks in Max: 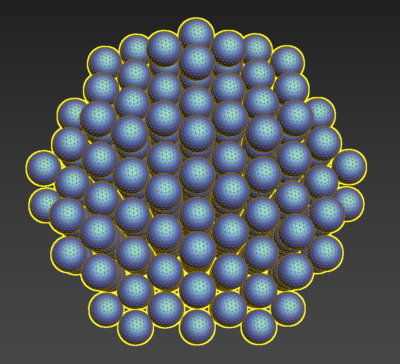 Now within Unity, I was able to play with the balls by creating a script to animate them.  I tried a few things and then stumbled upon a really nice way to move and make them grow and shrink.  It’s basically a very simple Simplex noise fractal algorithm that takes up only 13 lines of code, but if you watch the video you’d swear that there’s some kind of intelligence behind the movement.  It’s so mesmerizing.  Ok, I’ve kept you in anticipation long enough – here’s the video!