As with many things in life, one thing led to another.

It all started when I decided to revisit my noise generator.  I was never 100% satisfied with the one I created because there were some artifacts like the mountains would favor a diagonal orientation.  So, I completely re-wrote the noise generator and now it is so much better.  The mountains are truly random now with no obvious visual bias.

So, I headed back out into the Internet in search of anything that can help me here.  I came across some very good DEM (digital elevation model) maps created by the very nice folks at USGS.  Take a look at their very nice website here: https://astrogeology.usgs.gov/search

I grabbed some elevation maps of the Moon, of Mercury, and I think either Ceres or Vesta.  I brought them into Photoshop, resized them, and readjusted the values.  Here are the three maps after adjustment: 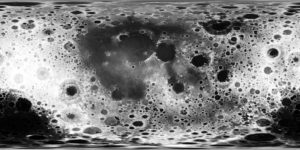 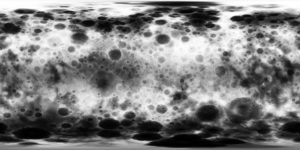 I updated the planet generator to use these maps (a random one is selected for each atmosphere-less planet).  And here is an example of how it looks in the game (click on the image to zoom in).  The second image shows the terrain vehicle and ship near the rim of a large crater. 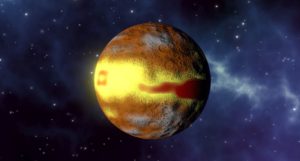 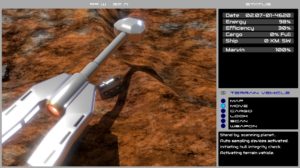 Also – I made it so that for all other planets with an atmosphere, the amount of rain that falls depends on the atmospheric density.  In addition, the velocity of the water moving across the surface when simulating erosion depends on the gravity of the planet.  With those changes, the planets in this Starflight remake look less uniform and more varied.  Good stuff!